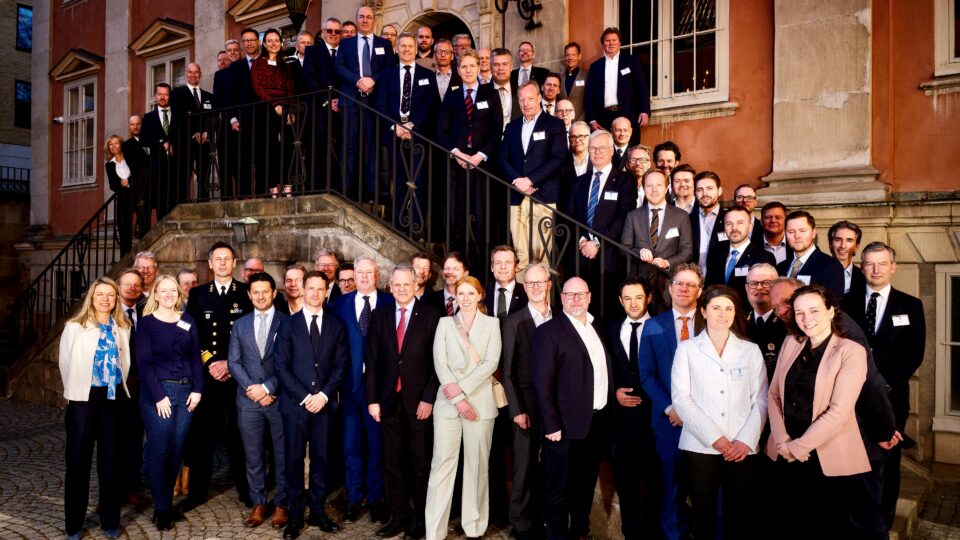 It has been intense days at the Embassy of The Kingdom of The Netherlands in Sweden.

During four days, 100 guests from leading positions within the Dutch and Swedish defence industry filled the halls of the Dutch embassy to attend the “Swedish-Dutch Defence, Security and Aeronautics Innovation Day and EDF-mission.”

The event was initiated by the umbrella organizations of the Swedish and Dutch defence industry organisations SOFF and NIDV, together with Dutch RVO, the Dutch ministry of Economic Affairs and Climate Policy and The Netherlands Innovation Network Sweden. As the name suggests, the program encompassed two parts:

Following up on the memorandum of understanding

The timing of this event could not have been better as the situation in Ukraine calls out for tighter European cooperation!

However, preparations of this event have already taken place much earlier, as Swedish SOFF and Dutch NIDV, have been planning to do a follow-up event on their Memorandum Of Understanding, which was signed in 2019 in The Hague, already before the Corona crisis.

“SOFF:s main goal is to promote the common interests of the security and defence industry in order to achieve the best possible preconditions for future business.”

“The NIDV acts as information provider, advocate and service provider for the Dutch Defence and security sector.”

To get to know each other and to “break the ice”, the first part of the event was a reception at the residence of the Embassy of The Kingdom of The Netherlands in Sweden.

Here, Dutch ambassador to Sweden Bengt van Loosdrecht opened the event with a speech about the building the guests were located in – The former home of Dutchmen and canon builder Louis de Geer!

What Louis de Geer probably would have said if he knew that today the top leaders of the industry he once worked for gathered in his very own halls?

The future of Dutch-Swedish defence collaboration

On the next day, all participants gathered at the Dutch embassies biggest hall for the “Defence, Security and Aeronautics Innovation Day.”

As the name tells, this day focused on innovations within the topics of defence, security and aeronautics!

Many grand names were found on the program of this day including Dutch Deputy NAD Rear Admiral Jan Willem Hartman and Swedish Deputy NAD Anders Sjöborg who jointly presented the possibilities for Sweden and The Netherlands from a Ministry of Defence perspective (see picture below).

Asking John Dekker, Senior Innovation Advisor at The Netherlands Innovation Network Sweden and organizer of the event from Dutch embassy side over the achievements with this event, he explains that: “One particular achievement of this event is that we connected the Dutch and Swedish defence research organizations TNO and FOI with each other.”

“One particular achievement of this event is that we connected the Dutch and Swedish defence research organizations TNO and FOI with each other.”

John Dekker explains that research organizations within defence do not always find each other.

Accordingly, he is happy that The Netherlands Innovation Network Sweden has been given the opportunity to organise this event as it brought the organizations closer to each other which in return will help The Netherlands and Europe to implement its defence innovation and research agenda.

During their presentations, TNO and FOI focused in particular on updates within their current research areas.

Furthermore, an overview of the historical roots of the collaboration between the research organizations as well as an on current and planned future cooperation projects was given.

The second part of the event was a European Defence Fund (EDF) mission.

The aim of this part was that the present companies find partners and start forming consortia for concrete projects within the European Defence Fund.

The EDF-mission was officially opened by NL Special Envoy for European Defence collaboration Tom Middendorp who explained about the importance of this subject given the current developments within Europe.

After presentations on the European Defence Fund and in particular Swedish and Dutch EDF coordination by the Swedish EDF coordination office at the Swedish Defence Materiel Administration FMV and the Science and Technology Department at the Dutch Ministry of Defence, 22 companies on each side where gathered in break-out sessions across five rooms throughout the embassy.

In the break-out session, individuals gathered across the topics of space, digital transformation, underwater warfare and materials and components – Each topic supported by an expert and moderator.

The day ended with an individual matchmaking as well as drinks at and outside of the embassy.

During the last day, the Dutch delegation visited the SAAB experience center and Teledyne FLIR to see some recent developments of Swedish defence technology.

Here the Dutch delegation learned more on the Swedish defence system, the history of SAAB as well as the increased focus on European Defence Action.

Furthermore, a presentation was given by Jan Terlouw, Director of SAAB NL who shared unique insights into the future plans of SAAB Netherlands and concrete collaboration opportunities.

At Teledyne FLIR, who is the world leader in the design, manufacture, and marketing of thermal imaging infrared cameras, an outline of the companies history, its current technologies as well as the insights into how the company is positioning itself within different markets was given.

It is no doubt that the event was a huge success!

In fact, 70% of the Dutch participants answered in the final evaluation that they have found Swedish partners during the event with whom they want to do defence projects in the future.

A total of 62% of the Dutch participants have hereby found partners to build consortia with within the European Defence Fund.

The majority of Dutch participants have found 2,3 or more potential partners for future projects.

Do you want to get in contact with organisations from the Dutch and Swedish defence sector?

Please feel free to reach out to us via our contact page.